CALL US TOLL FREE AT 1-888-777-9961
The ocean is in a constant state of change. Understanding the online surf report and forecast will help you be in the right place at the right time when it comes alive.
I’ve broken it down into four elements to get you started:

1. Swell - Waves as they move through the water before breaking on a beach or reef.

2. Wind - Local wind conditions that affect the surface and shape of the wave.

4. Local Knowledge - The details and nuances of the local beaches that ties all the data together to form a clear picture.

I have used screenshot excerpts from the Cox Bay forecast on Magicseaweed to help you navigate the site on your own. We've also included other sites we use, linked at the bottom.
Let's dive into each element to consider when reading the surf report.
SWELL
Swell is generated by wind blowing over the surface of the ocean during storms. This wind energy transfers into swells that travel away from the storm source and towards our coastline. Here is an example of a chart of part of the PNW that shows areas of low pressure (storms) as Red and areas of High pressure (clear skies and low wind) as Blue. 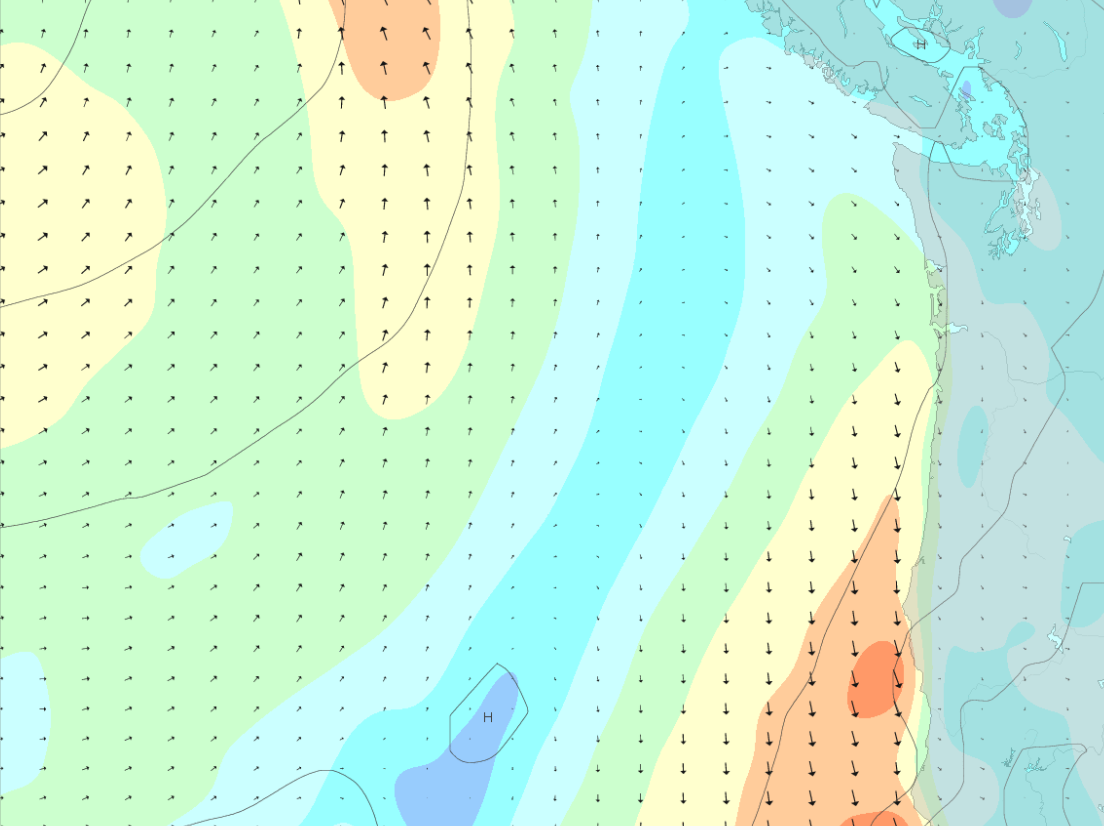 Wave height describes the height of each wave from the ‘peak’, to the ‘trough’, measured in feet or meters.

Interval or period is the wavelength, measured in seconds. Think of it as the distance in time between the peak of each wave as it passes a fixed point. The power of a wave increases as the interval does.

Direction describes the point of origin of the swell. This is measured by the degrees of a compass.

Combining this on a chart will look like this: 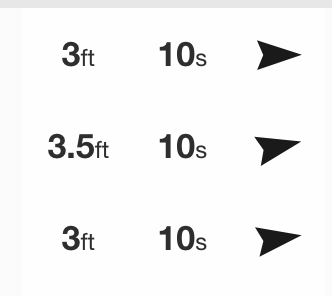 This tells us that a 3ft Swell with a 10 second interval and coming from the west will be breaking at Cox bay. The surfing quality of these breaking waves will depend on the following factors of local wind and tide.
LOCAL WIND

We’ve mentioned that wind is responsible for the creation of swell. It also plays a key role in the quality of that  swell as it breaks on our beaches.  Local wind is measured by its speed and direction. We use terms to describe wind in relation to the coastline:

Offshore - towards the sea, grooming the face of the wave into a smooth wall. We love offshore wind! A telltale sign is the spray blowing off the crest of the wave and out to sea.

Onshore: towards shore. This wind will cause the waves to crumble and break in a disorganised way. When it is onshore we will often describe the surf as ”messy”.
Cross off-shore: across the waves in an angle towards the sea, creating small ripples on the surface.

Cross on-shore: across the waves in an angle towards the shore, creating “crumbling” sections on a breaking wave.

Glass: No wind. This can make for exceptionally smooth and picturesque waves.

The large numbers describe average wind speed, whilst the smaller number describes the gust. The arrow shows us the wind direction.
Magicseaweed uses a colour coding system to indicate whether or not that is favourable for the given location. In the case of Cox Bay, although the wind is offshore, it is very strong with gusts at 40 mph. This will make catching and riding waves more challenging, though the wave face will still be smooth.
I use  Windy to cross reference for accuracy and for a good visual representation of local winds on the coast. 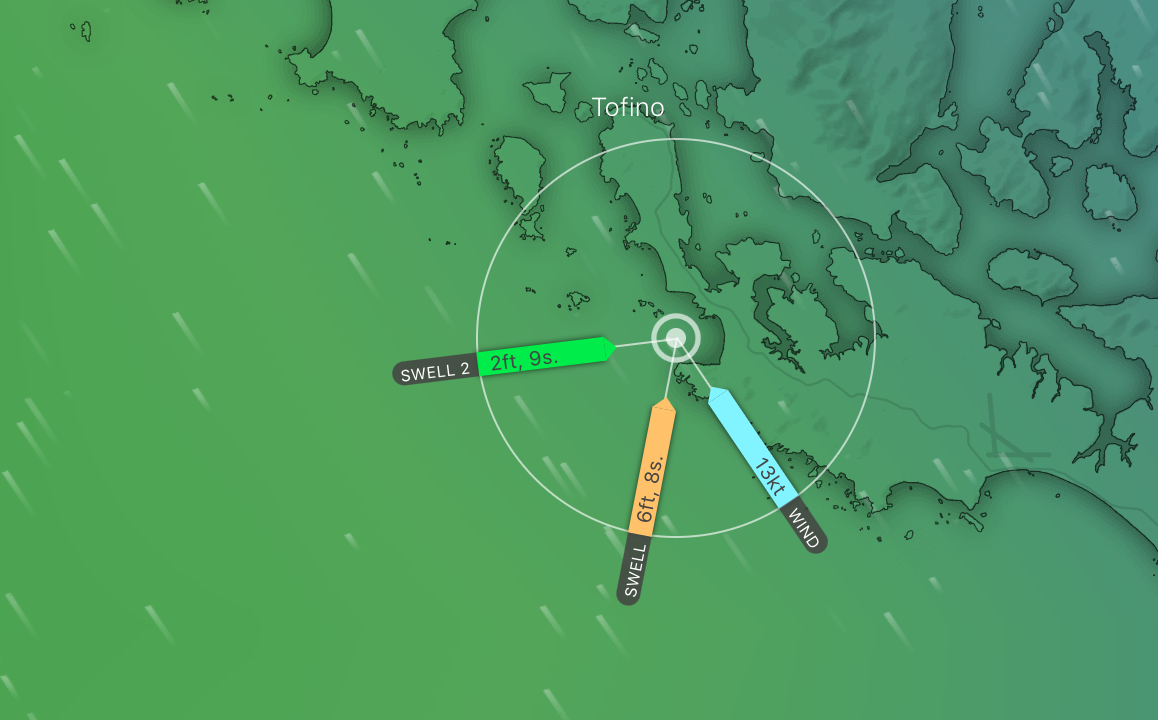 Tides move on a ~12 hour cycle: 6 hours Ebb (out), 6 hours Flood (in). This change in depth affects the quality of waves in different ways depending on the unique aspects of the given surf break.

Some breaks work best on an ebb, and some on a flow. For some it doesnt matter and you’ll find good waves on all tides. Cox bay as an example is not a tide dependant surf spot, and can have fun surf conditions on virtually all tides. Beware of seasonal fluctuations in tide range and phenomena such as king tides that can cause hazardous high tides and strong current. 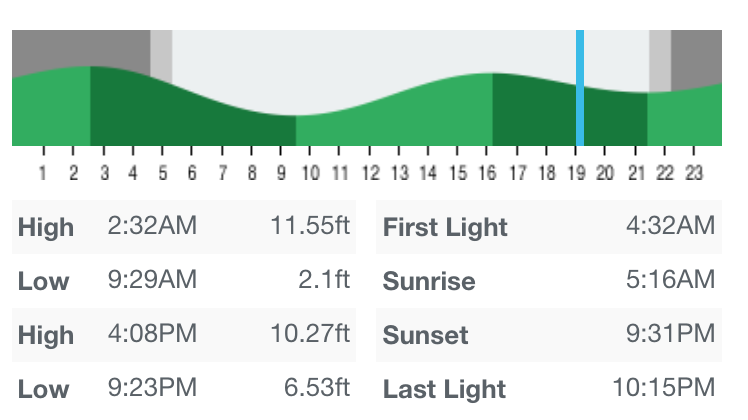 Once you have an understanding of these three components: Swell, Local Wind, and Tide, you might be able to make more sense of a complete magicseaweed chart: 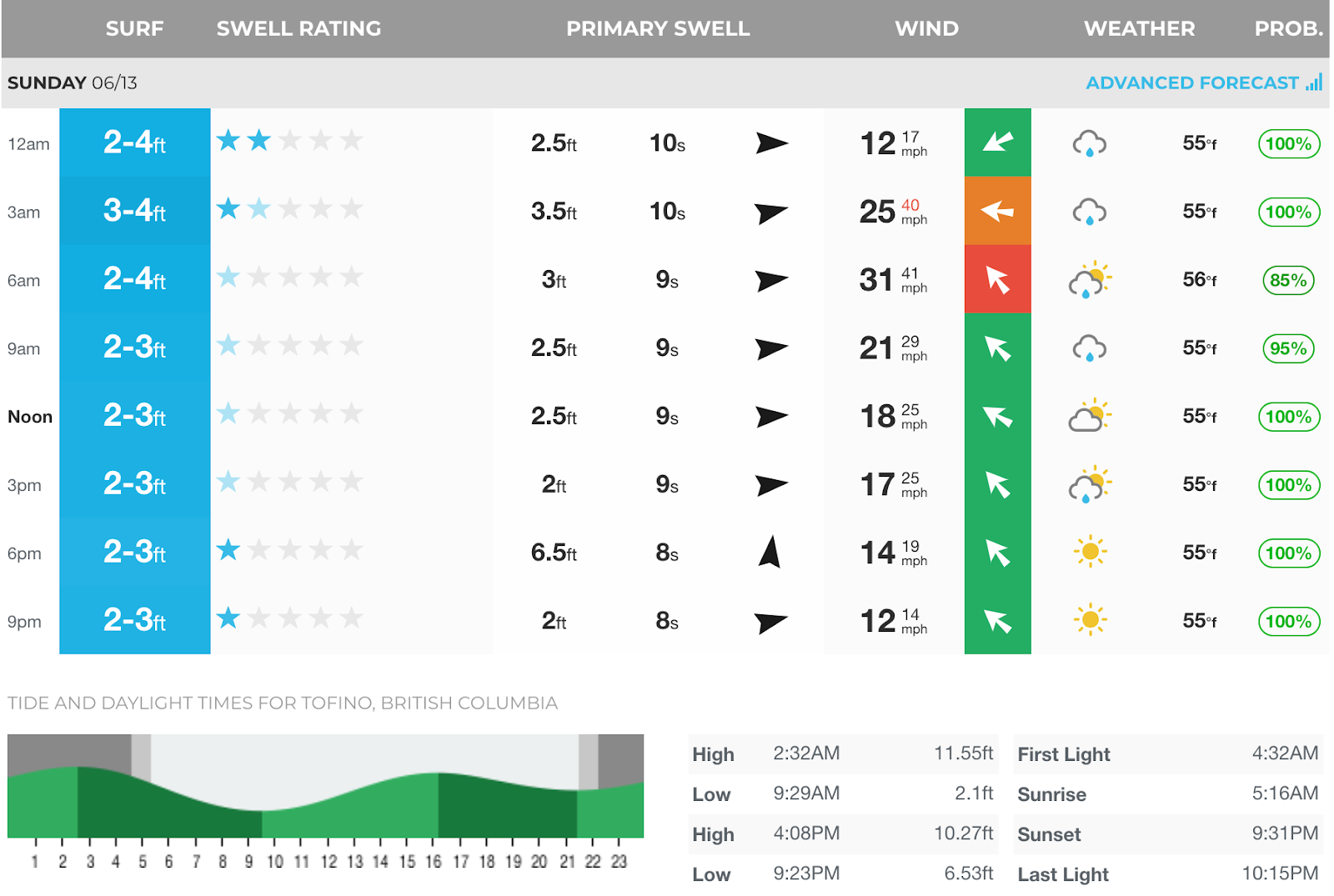 *Note: Often there are multiple swells occurring at once. For simplicity, I have only chosen to view the primary swell that will produce the most prominent waves at Cox bay. Secondary swells are typically smaller swells that do affect surfing conditions.

Finally, don’t trust the “swell rating” column. The star rating system is a subjective and arbitrary measure that often misses the mark.  I would suggest you record the surf forecast for your sessions in a journal and describe the quality of the surf in your own terms. As you get to know spots you will start to gain knowledge of the conditions needed to toast your surf bagel.
LOCAL KNOWLEDGE

How is it that when the waves get good, surfers emerge as if out of nowhere? The answer is that surf forecasts only tell a small part of the story. Seasoned surfers are attuned to the subtle changes in ocean and weather conditions, and to the combination of variables needed to make magic happen.